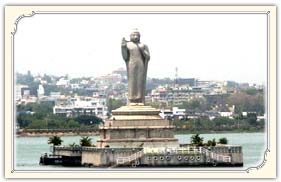 The Hussain Sagar Lake is one of the popular landmarks and important tourist destinations in the city of Hyderabad. Hussain Sagar Lake, situated about 2 km from the heart of the city of Hyderabad, connects Secunderabad to Hyderabad. The Hussain Sagar Lake of Hyderabad is the largest artificial lake in Asia. This lake was built during the reign of Ibrahim Quli Qutub Shah by Hussain Shah Wali in 1562 AD. Hussain Sagar Lake, built on the tributary of the River Musi, had been of significance in the early days since it connected the twin cities of Hyderabad and Secunderabad. The best time to visit the Hussain Sagar Lake and Hyderabad is from October to March, as the weather is pleasing, unlike summers which are likely to get very hot and humid. The lake is open to public on all days (except Mondays) and time. Read further to know more about the lake. The place where the Hussain Sagar Lake is located is called ‘Tank Bund’. It is an abridged version of its actual area and has attained lovely trimmings and environs that augment its appeal to tourists as well as the residents of the twin cities. The lake doubles up as an important landmark as well as picnic and recreation spot. The lake is bordered by four major sections of green space, Indira Gandhi Park in the east, Sanjeevaiah Park in the north, Lumbini Park in the south and a green belt stretch squeezed in between the Raj Bhavan road and the Necklace Road in the west.

History
Situated in the heart of Hyderabad city, Hussain Sagar Lake is one of the largest manmade lakes in Asia. The origin of Hussain Sagar Lake dates back to 1562, when it was built on the tributary of river Musi by Sufi Saint Hussain Shah. The lake was built to meet the water and irrigation requirements of the city. Till 1930, the lake was used for irrigation and drinking water requirements. A prominent tourist spot, the lake connects the twin cities and in the lake’s centre is a monolith statue of Lord Buddha weighing 350 tonnes, which is 16 meters tall and made of white granite. The lake which is just 1.5 km from the city also has a bund constructed on its banks to control the flow of water on the other side. Inaugurated in 1993, the lake is accessible through ferries. This artificial lake holds water permanently. The lake also has historical significance that it is on the banks of this lake that the treaty between Mughals and Golconda was settled. There is also a monument of Qutub Shahi which stands 1.5 km east of Hussain Sagar.

Activities
Hussain Sagar Lake has plenty of water sports activities which include boating, yachting and sailing. In addition to it, the state tourism also provides new and better facilities like speed boats, motor boats forty eight seated launches and so on. Star lit dinners and private parties can be conducted on the launch. The annual regatta competition draws plenty of adventurous loving persons from all over the world.

Other Attractions
Lumbini Park and Birla Mandir which lie adjacent to the lake are worth visiting. The ancient temple of the Katta Maisamma lies closes this lake and draws plenty of devotees every year. Visitors visiting the lake on Sunday evenings can witness cultural programmes that are conducted by the Department of culture, free of cost. One can also see the fascinating Birla Mandir, NTR garden, Jala Vihar, Water Front and Sanjeevaiah Park adjacent to the Hussain Sagar Lake.