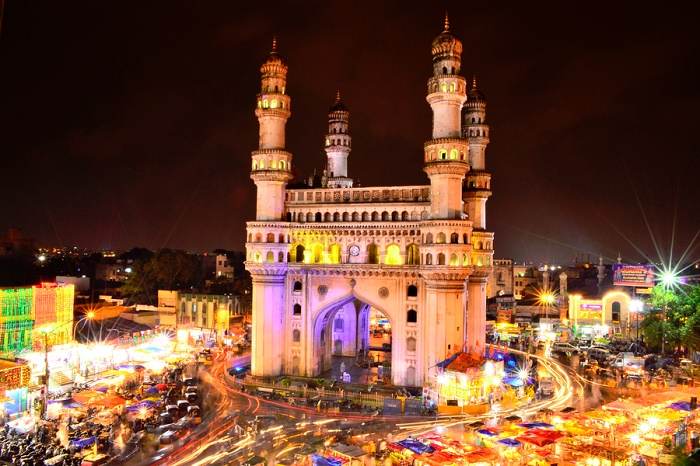 Where is it located: Hyderabad, Telengana, India

Why was it built: To commemorate the end of the plague.

Dimension: The base is square, each side 20m in width. Four arches on each side are 11m wide and 20 m in height. The four minarets stand at a height of 56m from the plinth.

Lesser Known: As a tribute to the city’s most iconic architecture, Lindt chocolatier Adelbert Boucher created a scaled model of the Charminar out of 50 kilograms of chocolate which was displayed at The Westin, Hyderabad, between 25 and 26 September, 2010.

Owing to its architectural similarity, Charminar is often called “Arc de Triomphe of the East”.

The second floor of the structure houses the oldest mosque of the city. It is located on the western side of the roof. The eastern part served as the court at the time of Sultan Qutb Shah. There are two galleries inside the Charminar – one over the other. The main gallery has 45 musallah or prayer spaces opening up to an uncovered space that may accommodate more people during Friday prayers.

Four clocks were added along the four cardinal directions in 1889. The small Vazu in the middle of the courtyard with a small fountain provides water for Ablution for Muslims offering prayer in the Mosque.

Legend has it that an underground tunnel connects the Charminar with the Golkonda fort. According to rumors, the tunnel was built to help the kings and queens escape to safety during a siege. These speculations have not been confirmed till date since the existence of any such tunnel has not been reported.